It has been a while since I posted anything here to really do with the actual drawing of cars… I mean, shit, that is the name of this whole mess, after all. I suppose that I could throw a few doodles into the mix now and then, right?

Going through some of the older sketchbooks and whatnot, I’ve compiled a little peek behind the scenes; the stuff that goes on before the vector and digital voodoo-type sorcery. Let’s start with this piece: 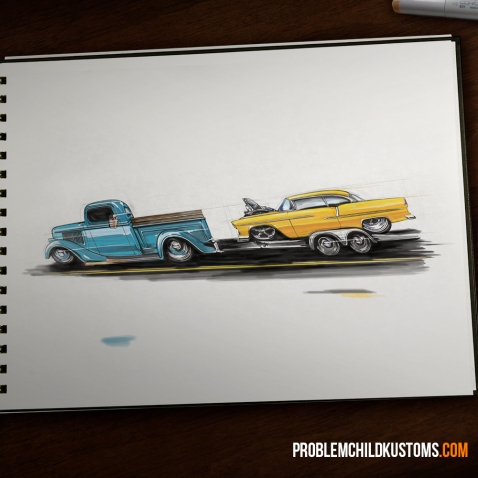 I had wanted to do a cartoon-y piece for a while, and the opportunity presented itself back in ’08-ish, so I went at it with some gusto, and created the ultimate swap meet find moment, with this happy gent scraping his way home with a brutal ’55 Chevy in tow. From markers to the scanned and re-drawn, vector art, you can see the importance of staying as true as possible to the original work. All pen tool… no brushes, auto-trace, meshes or other preset nonsense. It’s all about retaining the original line quality, and saving that hand-drawn looseness, but gaining all of the good things that a vector piece can supply!

I do a lot of t-shirt work, and to be honest, I enjoy it a lot more than the hot rod work, especially as things progress with my neuromuscular condition (more on that soon), and it really gives me a chance to play around in my imagination. There are so many things you can get away with, stretching reality on a graphic, versus having to make things work on the street!

This piece was a fun one in so many ways:

My pal Jon had wanted a cool tee for his shop. He knew he wanted a pinup girl with a retro feel, but wanted to include two of the more well-known cars they’ve painted… However, those cars are decidedly modern Pro-Touring style rides, so the challenge was on to make these elements work. I decided that I’d use the opportunity to include elements from some of my favorite science fiction spacecraft, lending a little bit of a retro/space feel. And what space-age pinup would be complete without a glass dome helmet and a ray gun-turned-paint gun? Naturally. Sketch to color-blocking in marker took what seemed like forever as my hands weren’t cooperating too well at the time, but I had managed to bust this out over a couple of days (from sketch to final vector work):

Speaking of tees and posters, here’s a little one from 2012:

This is a peek at that weird moment where the sketch meets the digital work. For me, this is a bittersweet moment at times, knowing that some elements in the original design will probably change, be it to make things more print-friendly, of due to a client’s request… And some of the really neat little bleeds and whatnot in the marker stage will be lost forever to the super-smoothness of a vector curve. I pay a TON of attention at this stage to keep as much of that hand-hewn character and personality in there!

Let’s peek at the rendering side of things with a little ’50 Chevy pickup piece. Starting with a pencil sketch (you can find the whole process on this particular illustration as part of a quick tutorial, if you’d like), I refine it to a point where I feel confident that I have enough information to move into the digital side. This one got a bit carried away, as I was putting that how-to together, and thought I’d have an expanded version for the upcoming book:

Mostly pencils with just a touch of gray marker making its way in, just to nail down the shading.

Once it’s all vector drawn (again, I’m a strictly pen tool kinda guy on these personal pieces, as it’s more about getting m,y own hand and style into the art, versus banging out a piece to feed the kids. After a bunch of hours and hundreds of layers and detailing, we get this: 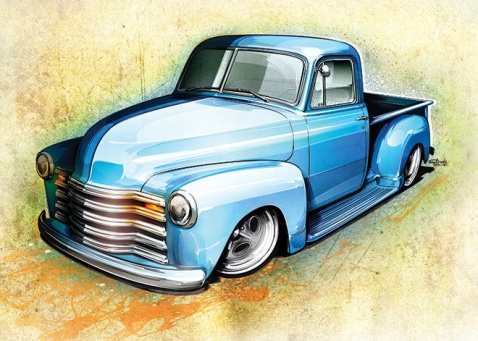 One last piece for this installment, if you’ll indulge me:

Sketching on-site is always fun, and this piece was the highlight of a fun weekend, hanging in Burbank. While the plan was to go full digital with this one, I decided that it just had too much going on to lose the feel, and decided that markers just fit the bill, and, well…

…it worked out pretty well! Experimenting sometimes with a technique or style that’s outside of your everyday working methods can often bring exciting results! In this case, I had really intended to keep it looser, and get that cool plein air feel… but in the end, I forced a bit of my tighter rendering style in there. Maybe next time!

I draw cars. I also provide full-service hot rod design and illustration, custom car, graphic and web design tailored to the custom automotive aftermarket, including logos, branding, project planning and research, and even apparel design. Need an ad, some copy, or a jump on social media? I do that, too. My mission is straightforward: To consistently provide the ultimate in design creativity and customer service, with an experience and artistic vision that is second to none. While working to raise the standard of automotive illustration, I seek to educate the public with regard to the labor and sacrifice required to create a work of fine art.
View all posts by drawinghotrods »
« Previous post
Next post »